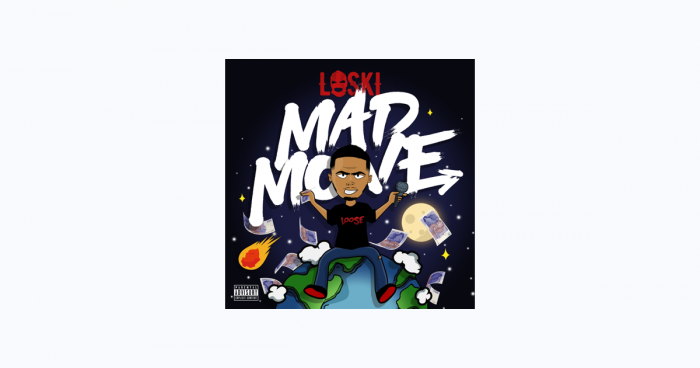 “There are a few truthful rappers,” Loski tells Apple Music. “But there aren’t a lot of them. Everything I’m saying is truthful. My whole life I was in trouble with the police and I was literally stuck on my block. Now that’s changed and my life is the best it’s been. I’m getting paid to be free.” The Kennington MC is coming to the fore during a golden age for UK rap, but honesty and gratitude aren’t the only attributes guiding his second mixtape. “People tell me my versatility is what separates me,” he says. “Everyone’s mad sick at what they’re doing, but no one’s doing everything. I’m pushing myself to do everything, in every lane.” Let Loski walk you through Mad Move, track by track.

“Big Man”
“There’s a lot of people always talking, so this is very much a ‘Keep where you are and I’ll keep where I am’ message. It’s a cheeky message, though, to the older people, because I’m 19 and I feel like I’m doing better than a lot of them.”

“Hammers” (feat. Latts)
“I do obviously like working with other artists that are mad big, because I’ve got future features with mad sick artists. But on my tape, I like to bring in artists who are coming up. Latts is a drill rapper from Hackney, from the same side as [UK rapper] Asco. I obviously rock with Asco, so it’s about me showing love to his people. Once one person’s through, you bring a whole load of people through.”

“Hazards 2.0”
“At the time I was thinking that I didn’t want to do high-tempo drill anymore, so I when came in with ‘Hazards,’ I thought I would end it with that. When I put ‘Hazards’ out, no one had heard of me, but other rappers were still just talking. So it was about putting my point across. This also just captures how I was feeling at the time.”

“Calm Down”
“Where I’m at in my career right now, I can’t say certain things anymore. I’m elevated now. If an MC’s rapping about the same things as they were two years ago, cool, but nothing’s happening for you then, is it? Nothing’s really going on. I could go back to the same material and rap about guns, but it would be a lie. Everything I’m saying is honest and I’m just pushing, pushing.”

“Hoes N Bands”
“I made this track when I got my first advance. I was new to it all. I’ve definitely matured since then, though. You get so much attention, and there’s suddenly so many girls and so much money, it was just mad.”

“Full Stop”
“One of my closest friends had just died, and this was my response to a lot of talk coming out from a lot of different people. [Producer] Levi [Lennox] made the beat for this one—he’s a regular producer. He’s made a couple of the beats on the mixtape. I remember him asking me how I was feeling the day we recorded this and I was like, ‘I’ll be real, man, I want something aggressive but calm. Let me just rap it out.’ If I’m not really in the mood, you’ve still got to work because you’ve got to get paid.”

“Boasy”
“I know there’s been some stories about this track being about my spending sprees and all that. I think it’s just my age. It’s just exciting. If a 40-year-old was talking about how much money they’re spending on clothes, it wouldn’t really be a thing. Everyone my age wants to get to this level. It’s like a dream. I’ve calmed down on the spending. I’ve got an accountant now, and she’s really on me.”

“Fashion Avenue”
“I love designer labels. I remember leaving the house one day for the studio wearing some mad—probably two-bag, three-bag [£2,000-£3,000]—outfit. So I felt like I was in some fashion avenue, literally. The avenue I’m in is full of fashion. I’m still not getting anything for free, though! LV, Fendi, these guys are tight.”

“No Cap”
“This one was weirdly difficult to name. We knew the streets would love a Loski and DigDat track. Then we started talking about how the track has no capping, no lying. We’re just the youngest guys talking about what’s going on.”

“DBD”
“Don’t Be Dumb. I did this one with a producer called Ayo. He does loads of my stuff. I made this one quite early, maybe a couple of tunes after [2018 breakthrough single] ‘Cool Kid.’ I was still trying to master that sound.”

“Something New”
“My girl kept telling me to write a song for her. But I just had no idea how! I tried telling her that I can’t make no mad love tune. I tried to do something, though, that still reflects me and where I’m from, and maybe keeps her happy! Is it my first love song? If people want to call it that, then wicked.”

“Live Like That”
“This one’s sick. There are loads of radio tunes that are banging out right now, but they’re not me, so this is the only way for me to go on the radio with that ‘singy’ vibe but still talk how I want to talk.”