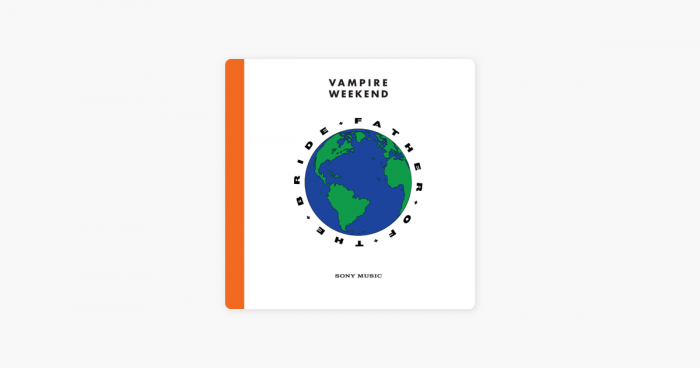 “It feels right that our fourth album is not 10, 11 songs,” Vampire Weekend frontman Ezra Koenig explains on his Beats 1 show Time Crisis, laying out the reasoning behind the 18-track breadth of his band’s first album in six years. “It felt like it needed more room.” The double album—which Koenig considers less akin to the stylistic variety of The Beatles’ White Album and closer to the narrative and thematic cohesion of Bruce Springsteen’s The River—also introduces some personnel changes. Founding member Rostam Batmanglij contributes to a couple of tracks but is no longer in the band, while Haim’s Danielle Haim and The Internet’s Steve Lacy are among the guests who play on multiple songs here. The result is decidedly looser and more sprawling than previous Vampire Weekend records, which Koenig feels is an apt way to return after a long hiatus. “After six years gone, it’s a bigger statement.” Here Koenig unpacks some of Father of the Bride‘s key tracks.

“Hold You Now” (feat. Danielle Haim)
“From pretty early on, I had a feeling that’d be a good track one. I like that it opens with just acoustic guitar and vocals, which I thought is such a weird way to open a Vampire Weekend record. I always knew that there should be three duets spread out around the album, and I always knew I wanted them to be with the same person. Thank God it ended up being with Danielle. I wouldn’t really call them country, but clearly they’re indebted to classic country-duet songwriting.”

“Rich Man”
“I actually remember when I first started writing that; it was when we were at the Grammys for [2013’s] Modern Vampires of the City. Sometimes you work so hard to come up with ideas, and you’re down in the mines just trying to come up with stuff. Then other times you’re just about to leave, you listen to something, you come up with a little idea. On this long album, with songs like this and ‘Big Blue,’ they’re like these short-story songs—they’re moments. I just thought there’s something funny about the narrator of the song being like, ‘It’s so hard to find one rich man in town with a satisfied mind. But I am the one.’ It’s the trippiest song on the album.”

“Married in a Gold Rush” (feat. Danielle Haim)
“I played this song for a couple of people, and some were like, ‘Oh, that’s your country song?’ And I swear, we pulled our hair out trying to make sure the song didn’t sound too country. Once you get past some of the imagery—midnight train, whatever—that’s not really what it’s about. The story is underneath it.”

“Sympathy”
“That’s the most metal Vampire Weekend’s ever gotten with the double bass drum pedal.”

“Sunflower” (feat. Steve Lacy)
“I’ve been critical of certain references people throw at this record. But if people want to say this sounds a little like Phish, I’m with that.”

“We Belong Together” (feat. Danielle Haim)
“That’s kind of two different songs that came together, as is often the case of Vampire Weekend. We had this old demo that started with programmed drums and Rostam having that 12-string. I always wanted to do a song that was insanely simple, that was just listing things that go together. So I’d sit at the piano and go, ‘We go together like pots and pans, surf and sand, bottles and cans.’ Then we mashed them up. It’s probably the most wholesome Vampire Weekend song.”