To view this video please enable JavaScript, and consider upgrading to a web browser that supports HTML5 video

Singer Sandi Thom has said she has no plans to quit the music industry, after filming an extraordinary tirade against Radio 2 earlier this week.

In the clip, the singer, famous for the hit I Wish I Was A Punk Rocker, is seen hysterically crying after her latest song failed to make the Radio 2 playlist.

To view this video please enable JavaScript, and consider upgrading to a web browser that supports HTML5 video

But in an interview with Chris Moyles on Radio X this morning, the singer backtracked on the statement and said she wasn’t planning to leave the music industry.

When quizzed about whether she would quitting music, she said: ‘I think probably from this, I would say no. I think at that moment in time I was fed up to the point of that’s it, I’ve had enough.’

Thom also said that she stands by the video ‘100 percent’, but admitted that ‘emotions are running high’ when filming – as she is six months pregnant. 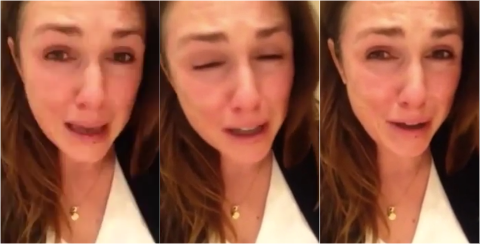 ‘I’m six months pregnant so emotions are running high anyway, but mostly it’s seven years of being independent and self-managed, self-producing, self-released, self-financed and still not getting any luck.

Describing her family’s reaction to the clip, she added: ‘My husband was a little concerned because I’ve had backlash in the past, and I think everyone was concerned that I’d get a lot of flak, so I think it was like Sandi I think you need to take that down.

‘But by the time that happened several people had picked up on it and then it’s just snowballed.‘

Chris Moyles Breakfast Show is on daily from 6.30am to 10am on Radio X.