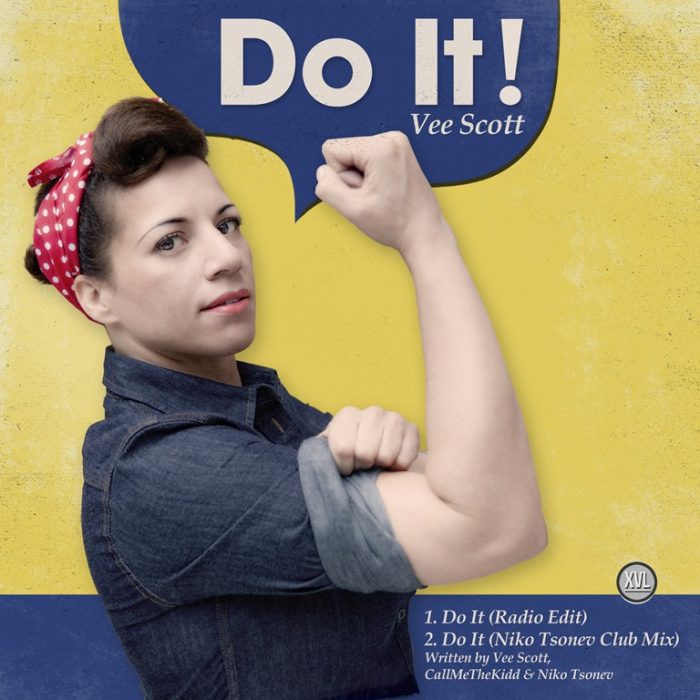 The brand new single ‘Do it’ from Vee Scott has risen up from the Top 30 to hit the Top 10 of the official UK Music Week Commercial Pop Club Charts.

With a career spanning over 2 decades, Vee Scott is the real deal.

Singing, dancing & composing from the age of 3, recording her first record age 8, winning a national competition age 13 & crowned the best singer in the UK, Vee has always loved to sing & began forging an independent music career whilst still at school.

Supporting chart acts, regular studio sessions & performing at Glastonbury by the time she had her 16th Birthday were an amazing introduction into the industry for this ambitious young girl from Liverpool, Bristol, Manchester & now London & Vee has performed literally thousands of live shows at many venues, clubs, events, festivals, shows including Glastonbury 5 times, Reading, both The Royal Albert & The Royal Festival Halls, across the UK & Europe, at countless raves including Tribal Gathering & Universe, many 4 & 5 star Hotels, Agia Napa, Tenerife, Germany, Blue Note, & she had the privilege of being requested to perform, for several years, for both the Royal Air Force & The Army.

She has appeared on many Radio shows over the years including performing at BBC & Galaxy live roadshows, appeared on the drum n bass episode of Sounds of The West, a ITV Series about the music coming out of Bristol in the 90’s & later co wrote the theme song for Cyprus’s first reality TV show – I’m A Star, after being crowned ‘The Dancing Diva of Agia Napa’ Cyprus Mail.

Vee has had many releases in many genres with the most classic in electronic, dance, house, drum n bass & dub & has released under many different names.

Her first solo single being as Virginia – Rainbows (More Rockers), then later she began to use other variations of her name – V, Vee & finally Vee Scott.

Vee Scott recently said “I worked my up from nothing, never got signed to a major label as they could never ‘fit me in a box’, I was told by 1 A&R, lol, but I finally had a number 1 in the world dance chart, number 2 in the UK club chart with the now Ibiza classic, Gimme Your Love (Media Records) making my dream come true, so I don’t feel I have anything to prove & I continue to do my thing & always will, as it’s always about the music..” The ex model, personal trainer, singer, songwriter, producer, vocal coach, writer & entrepeneurs’ feet have always been firmly on the ground”.

Health issues in 2013 left her unable to walk properly, but she started bouncing back due to the amazing ‘biohacking’ programme by Marcus Patric in 2018 & now, picking up where she left off, the original remixes from 2014 are out & Do It (The single) is out now with an album to follow.

Vee says “I give thanks & praise every day for my health miracles & blessings & thank everybody involved in helping me stand up strong again & ‘Do It”. – Vee Scott xx